Rooted in the traditions of excellence and innovation established in its earliest days,
ECS has continued to evolve and thrive since 1909. 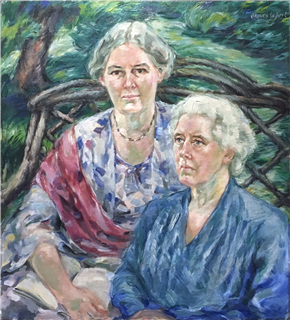 Maud Edgar and Mary Cramp were two remarkable, progressive teachers, who in 1909 decided to start their own school for girls. They were daring and caring thinkers whose stamp of innovation became the guiding spirit of ECS.


The School began its life in a home on Guy Street in downtown Montreal. There were 70 girls at the outset, including 15 boarders. The Founders equipped their pupils with a broad understanding of literature, languages, ethics, fine arts, as well as science and mathematics. Small classes and programs tailored for each student made their pedagogical approach unique.

Forty years later, the School relocated to a stately building on Cedar Avenue. By then there were approximately 150 students, with 17 boarders. The School continued to flourish in this building for another 16 years, but its leaders were always conscious of the need for a space designed and built to be a school.

Setting their sights on a property at the corner of Mount Pleasant and Montrose Avenues, school leaders officially opened the school in November 1964: at this point, ECS became a dedicated day school. Limitless learning in a world of possibilities: together we will lead and inspire every girl, every day, in every way.

Through bold leadership, courageous innovation rooted in research, and authentic engagement, our community will value and steward each girl’s distinct journey.

Our philosophy is grounded in our longstanding commitment to academic excellence, with a clear eye on the future that is reflected in our strategic thinking and planning. We are in the process of building a comprehensive new Strategic Plan for ECS, which will be our guiding framework for the next three years.
1 / 4